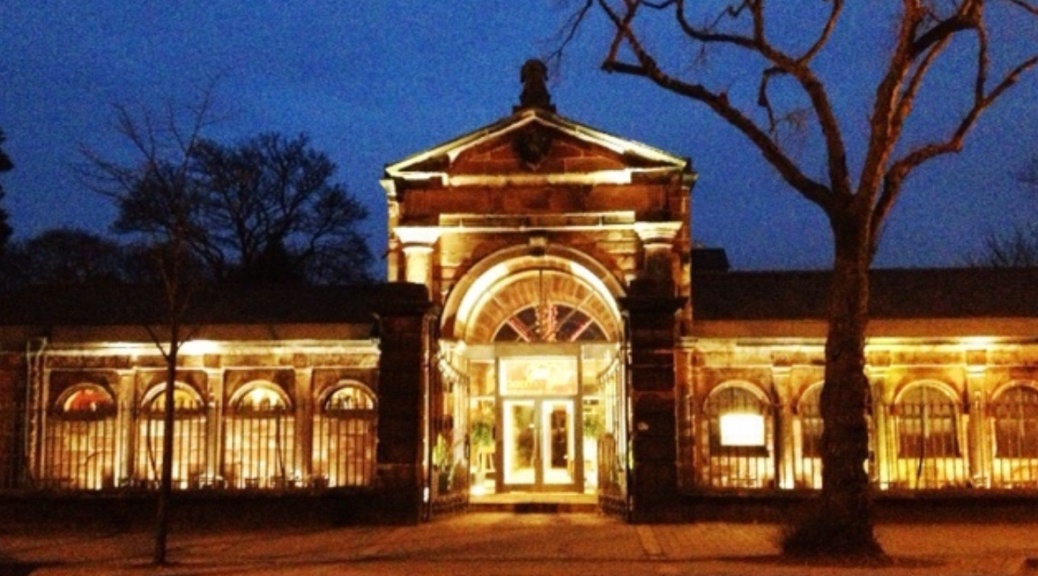 Spare a thought for my humble home town of Newton-le-Willows. A small lump of coal of maybe 20,000 souls, nestled between the great metropolis’ of Liverpool and Manchester. Famous for it’s has been rock star Rick Astley and having the first bloke ever to be killed on a railway. 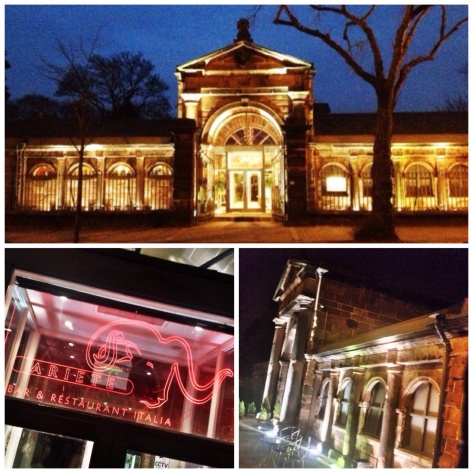 As far as gastronome is concerned it’s all a bit flat. A few decent pubs, it’s own curry yard, a phalanx of kebab shops and that’s about you’re lot. It does however, have at least one beacon of hope in Ariete, an Italian restaurant set in the oldest building on the High Street. The High Street is part of the great North/South highway known as the A49. It’s one of my favourite roads! Ian Botham went through it once on a sponsored walk. This is how good this road is. Ariete is housed in the best building on the best road.
Formerly the grand entrance to the Haydock Park Estate it provides a rather splendid facade, particularly at night when some bulbs light it up. In case you wondered Ariete is Italian for ‘Ram’. 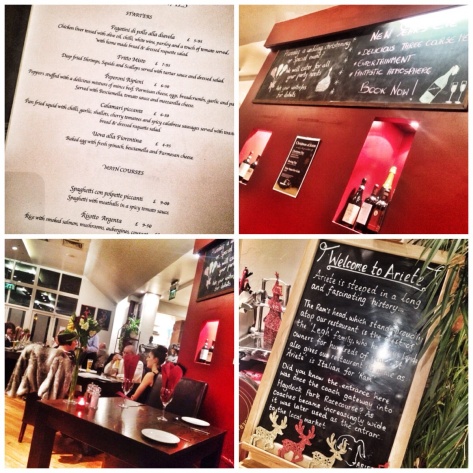 Inside things change a bit. Basically they have grafted a huge hangar on the back of this wonderous folly, complete with skylights and conservatory style windows. I reckon it could cope with 150 covers easy. As well as big it is high, which means the noise can bang on a bit. It’s not what you would call intimate. It sets up better for bigger parties really, but nonetheless the flame and I regularly walk down for a plate of pasta and a bottle of house red. Having said that, they have recently grafted on a ‘specials’ menu which changes pretty often, possibly weekly, so there is always something new to try.
We went in for Christmas Eve so we caught it this time on absolute top form. Completely full, the atmosphere and sense of occasion was bang on. A bottle of Italian Merlot oiled the pipes while the flame plundered a toasted muffin slathered in chicken livers, themselves spiked with chilli and herbs. She was well chuffed. I wafted into a spicy chorizo and squid stew, also set on a crouton with a wodge of rocket leaves. The squid was plentiful and well cooked, criss crossed and curling after a quick ‘shufty’ in a hot, oiled pan. It was a corking starter. 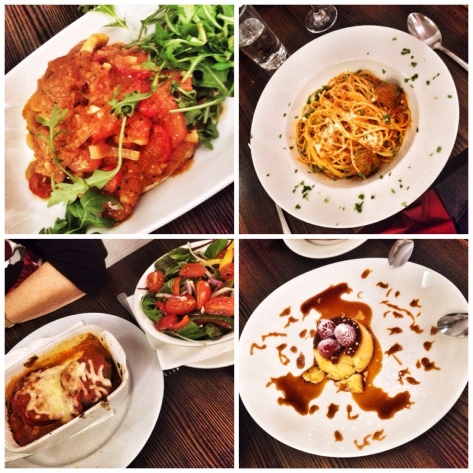 For mains the flame had another starter! But by hokey what a starter, she was stuffed as were the peppers, with beef mince, herbs and spices. She had a ‘small’ mixed salad to accompany. I had a spaghetti with spicy meatballs. Standard fayre I would agree, but if you do want a decent feed, you can’t really beat here. The portions are stupendous. Also worth a mention, is that the garlic bread is based on a massive pizza base. No couple of slices of baguette here, It’s a meal in itself so be warned if you order one with your starter!
I finished off with a creme caramel. A light delight to finish, very nice too, freshly made on the premises that day according to eccentric host Giovanni. We have had ‘a la carte’ here and enjoyed that too. The quality and value is hard to beat. £52 for two for three rollicking  courses, wine and coffee on a Christmas Eve. Not bad in my eyes. I’m not saying you should all trek across from the foodie enclaves of Chorlton or Didsbury or any of the other Cheshire outfits that lead the way in food nearby. I would suggest however, if you ever come to the races, or find yourself trundling down the A49 when the M6 at Thelwall viaduct shuts down for a bit of wind, you could do a lot worse than check out Ariete, The Ram of Italy, you’ll get a decent feed for not much money.
Ariete
136 High St,
Newton-le-Willows
01925 291555