“I’ve never had a Sunday roast to the strains of The Divine Comedy before!”

As Alex, our muscular front of house scouser says “we have an eclectic jukebox here, we run competitions to guess the tune”. I didn’t do too bad. Anyone remember ‘It’s my Life’ by Talk Talk? Anyway it made for some entertaining banter between The Flame, Granddaughter Jess and myself as we enjoyed a rather splendid luncheon at Albina in Crosby. Crosby is a smidgen north of Liverpool on the old dock road.

Albina itself nestles amidst a fairly mundane set of shopping emporiums just off a main trunk through Crosby. It’s a smart enough frontage, rustically emblazoned with its previous moniker ‘Albion….’. Sadly the poor chaps were forced to change the name after some bizarre disapproval by a London based outfit.

It’s a leisurely stroll through some leafy bits from the beach which sports the now famous ‘Gormleys Another Place’. These are a series of metallic, naked gentlemen which stand alone in an attempt to hold up the raging seas. As this was a cold, windy May afternoon they needed to make a good fist of it.

As with many of my gastronomic sojourns they germinate from a mere quip on Twitter. This time it was a ‘sarky’ prompt that dozens of love struck couples were swarming hand in hand towards Albina for another slap up feed. This was a wet Tuesday night! It would seem that despite the accolades (an AA rosette has been bagged already) Albina would heartily welcome a bit more trade. I hope it gets it because it’s good, very good.

We stepped through the open door on a Sunday at 12.30. The young relative was heading south at 4.30 hence the early timing. We were the only ones in. It was pretty bleak at first but the aforementioned Marcus soon had us at ease. It’s a growing space. A space that is developing organically. Alex is slowly adding it’s personality by scouring eBay. It’s coming together. There’s some nice simple touches. Simple furniture, simple walls, simple paint scheme. Despite the lack of punters, it was easy to imagine that full it could be a very special place.

We picked from the basic Sunday menu. Two courses for £15 or three for £18. The youngster picked all my choices. Jess started with the braised chicken faggot on a sage and onion cake. It came with the finest mushroom and bacon cream sauce I’ve ever tasted. Yes, I did get to taste it. Part of the deal of picking my choice was that we swap half way! I had a legacy from the previous night special, mackerel on a warm beetroot and potato salad. Both dishes presented beautifully and simply on a plain dish. Both dishes sublime.

For mains the youngster went for plain fish and chips. I say plain, for it was a fine hunk of soft white hake encased in a soft, seasoned batter. My fork full was superb. Young Jess didn’t quite share the enthusiasm she had for the fish with the skin on wedges. But they were great for me. The Flame went for fish pie with Mrs Kirkhams smoked cheese topping. Bit of an expert on fish pie. Thumbs were mainly up. Liked the fact it was all white fish, but missed the egg that The Church Green put in! I went for the roast beef. As with all the dishes, simply presented, hot and beautifully cooked. It was a good roast with a boat of real meat juices to slaver over if things got too dry. Top stuff.

We all went for puddings. I went old school, Jam roly poly with custard. Proper suet job this, and blimey what a portion! The Flame went for sticky toffee pudding complete with all the dates and butterscotch sauce. Jess had what turned out to be the star of the show. Chef Dave’s homemade salted caramel ice cream. Three truly sumptuous boules of creamy goodness. Thankfully she was full at this point so I was able to sweep to the rescue and scoop up a fairly decent sample.

The only disappointment for me was the lack of choice. The full menu (available at all other times barring Sunday) really is a treat. Historical British recipes using fresh, local, british produce. It’s a striking offer.

Despite being an hours run out, we will be back to go through a bit more of the card. If you really appreciate simple British food cooked and presented well, it is hard to beat. Make a day of it. Stroll through the Gormleys on the beach then up the road to Albina. Learn some Cerys Matthews tunes though, theres bound to be one on and you will get asked to name that tune! 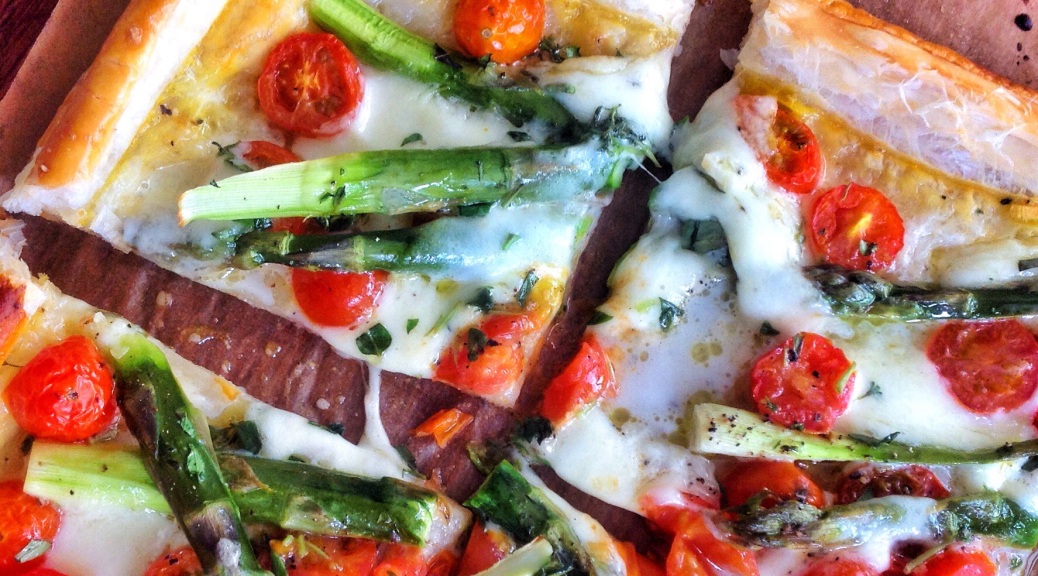 This is a brilliant, tasty and simple dish to make. I did it as a starter for six people. I just threw it in the middle and carved it up with a pizza wheel. Went down a storm. The recipe comes from the ever reliable Hugh Fearnley Whittingstall (River Cottage) and his equally reliable Veg book.   The basic ingredients are the puff pastry, some veg, some herbs and some cheese! You could apply some variations quite happily with equally good results. Ive done a few versions. They all work. The basic principle is the same: crisp pastry, soft caramelised tomato, tangy cheese. 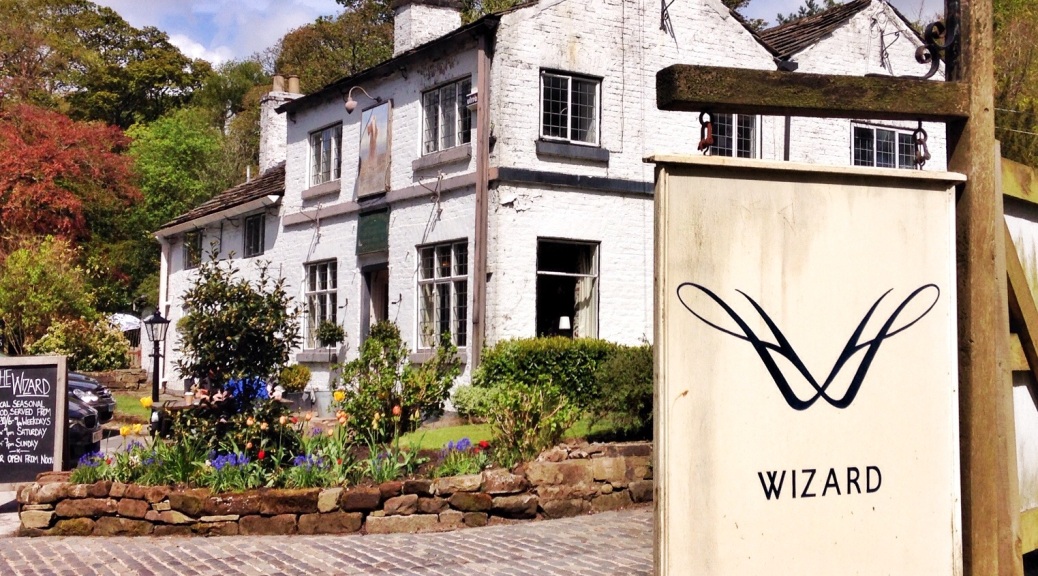 Well not this time I’m afraid. After a great start near farcical service quashed the magic. The Flame and I decided to turn back the clock and head east to once again walk the edge. It was a super bank holiday Monday, the sun was shining. The Flame made the call, “how about walking along Alderley Edge and seeing how The Wizard is, we’ve not been for years”. It was a great shout.

The Wizard was the place to be a few years back. Posh, Becks, Giggsy, they were all part of the scene and The Wizard was up there serving the stars with high end, pub grub and just above normal prices! It was good stuff though. It was the place we went for special occasions. The place you went to push the boat out.

We ventured in after a glorious to the edge and back (15 mins each way). The old place hadn’t changed. Outside the paintwork was creaking a bit. I’m sure it’ll get a lick soon. Inside, it was the same as it was the last time. Stone floors, low ceilings and heritage paint providing the backdrop for fox hunting prints and ugly pot dog ornaments. It’s quaint with a capital Q. Our sprightly young waitress swept us with gusto to our prearranged table. The reserved note telling all that they could sit here until 1.45, but woe betide you stay any longer as the Cooktwit was due in at two! A nice touch! Our table was set in the corner by the window. A super spot. The said employee, recited without stumble the three ales on offer. A Lion Brewery ale was soon in place.

We ordered up from the simple, single sheet menu. In good time our starters arrived. The Flame opted for the smoked salmon, cucumber, avocado and herb stack with a tomato salsa (£6.50). I had the flatbreads and houmous for a fiver. They were both superb. In fairness the salmon stack in particular was the finest starter I’ve tasted in a long time. Fresh, zingy and bursting with flavour. The houmous with warm bread oozing with cumin scented oil almost equally pleasing. We were on a roll. The old days flooding back.

Next up the mains. I ordered the smoked haddock, cod, king prawn and pea risotto with a crispy bit of squid (a heftyish £13.95). On first impression I had it looking a little pallid and uninspiring on the plate. A flash of superfluous greenery at the top edge providing the only colour. First taste lacked seasoning. The remote seasoning canisters (provided on each table) soon had that remedied though. From then on it was actually rather good. Plenty of fish, it was most agreeable. The Flames chicken club sandwich with chorizo and thrice cut chips (£7.95) arrived on white rather than the granary bread as ordered. It was quickly changed. The Flame rated the ensemble with a satisfying grin. I managed a chip dipped in a glorious jalapeno mayo which was delicious.

We then watched a table of eight have their table cleared, having dined after us. From then on we waited for what seemed an eternity to have our table cleared. We then asked for the dessert menu. We waited and then waited some more. Our waitress after prompting finally emerged admitting she had forgotten. Fair enough.

I ordered the panacotta with honeycomb and fruit (£5.95). Having watched Mr Rayner on Masterchef and noted his need for the ‘wobble’ when judging a panacotta I was ready and waiting. Mine arrived upside down in a cup! I couldn’t tell whether it wobbled or not. My substantial vintage, stainless steel spoon stood up in it though, once I had managed to penetrate the surface. It was not light and fluffy. Indeed once the first couple of spoonful’s (mixed with the fruit and textured honeycomb) had evaporated I was left with a cloying mound. A disappointing end really.

We asked for the bill, and then asked for it again, and again. It arrived at almost double what it should have been. Another table had been added to it. When the real bill arrived (£47) we asked to pay by credit card. We waited for the machine, and asked for it again. The service had deteriorated significantly. Watching our waitress chatting with other staff, cleaning cutlery while we waited was a touch disappointing. It dampened the experience. Spare a thought for the couple next to us though. They got their mains before their starters! And they had waited far longer than us!

It’s a shame really, it’s a fine space set in stunning surroundings, the food was generally very good and in fairness looking at some of the Sunday roasts coming out they look a very decent bet too. Perhaps we were unlucky with the service. It didn’t seem overly busy. Maybe the staff were new, lacked experience or maybe too few of them? I don’t suppose we’ll ever know.