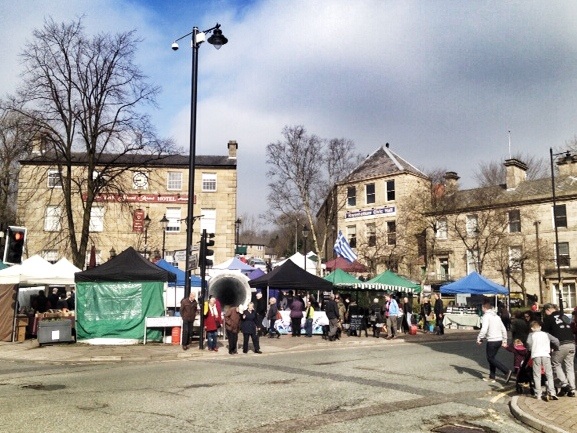 Always had a soft spot for Ramsbottom. A pre wedded date with The Flame in this gritty Lancashire village was always high on the cards when The CookTwit needed to play his romantic hand. Oh how we skipped, arm in arm down the Irwell with the promise of a cheesy jacket spud from the ‘spudulike’ outside ‘Rammy’ station. That an A4 Pacific or a double header Deltic was due to power across the high street any minute was but a minor consideration! Ramsbottom twenty years ago was known for its heritage railway, the East Lancashire Railway. Indeed it still is, but in addition Ramsbottom has become a small foodie heartland. Second Sundays in the month signal, to all who listen, the bijou artisan farmers food market of Ramsbottom. It heads up a roundel of smaller markets under the brolly of Bury.

The promise of a bit of sunshine after a desperately windy and wet winter led us once again ‘up ter Thirwell’ and to the promise of some decent grub to cook later for tea. Reliving the past once again we parked up at Summerseat station. We then trooped the two and half miles up the line to Ramsbottom. After a few sharp words from the flame, (having led her through the muddy undergrowth to a bridge less Irwell!) we eventually fell into ‘Rammy’ via the rather wonderful ‘Nuttal Park’. Here children were actually outside playing! swings were swinging and slides were sliding. “Jumpers for goalposts” anyone? If you have any doubts about which direction to take, Peel Tower high on the hill overlooks to keep us all in check.

We headed up Bridge Street from the station to its junction with Bolton Street. The sun was already lighting up the merry throng of under canvas traders, steadying to receive the hard earned reddies of the seasoned food minded punter. A delightful sight. As well as the fresh air brigade there is a small and civilised selection within the civic hall, itself a short skip up the cobbles. I think I should point out that the flame fails to function with the required level of lucidity without first quenching the larynx with a hot restorative. The handily placed ‘Chocolate Cafe’ raced to the rescue with a fine mug of jamaica’s finest. Chaps who are a little out of sorts with their other halves could do worse than loosen the purse strings in this fine emporium. As it’s name suggests chocolate is its game. It can be acquired here in all manner of guises, infused with spice, fruit, herb or nut. And it’s all calorie free!

It was then on to the main event. My usual ploy is to slink round all the stalls smartish and then work out where best to spend the prescribed quota of hard earned. In all there was about forty stalls between the brave outdoor types and the less hardy in the civic hall. There is the occasional craft type stall indoors, but it’s mainly food. Though I didn’t list them you could get yourself top versions of all types of grub. Artisan bread, pies, cakes, chutneys, jams, sausages, meats, game, dirty veg, fish, cheese and exotic hams all feature. We eventually settled for some fine Manx kippers and potted Morecambe bay shrimps from a proper fish stall. A wonderful walnut bread smothered in seeds and nuts, manchego cheese, Serrano ham, chorizo sausages and Sobrasada (spreadable chorizo!!) from Spanish fine food specialist Levanter. A superb Mediterranean chutney from The Heritage Kitchen and some sensational freshly made crab ravioli from Nonna Teresa. In all we probably spent £30 but it was all great stuff.

As a final treat we settled into arguably the best Sunday roast we’ve had in a long while at the ‘Hearth Of The Ram’. I have wrote about the merits of this fine establishment in a previous piece and our second visit outshone even that. I’m still tasting the tempura monkfish and the Derbyshire beef weeks later! The flames equally splendid rabbit croquette and chicken dinner still feature.

As if any emphasis is needed about Ramsbottoms foodie credentials we could have chosen a whole host of other foodie joints. Up the road from ‘The hearth’ is ‘The Eagle and Child’ which has its own prestigious awards for its Sunday lunch. ‘The Shoulder of Mutton’, ‘Ramsons’, ‘Sanminis’ and a few more are all within minutes and would have all delivered. As well as food there’s even a serious real ale trail. Sadly as my usual 50% of the driving deal wasn’t quite in vogue with the flame I had to settle for a single Timothy Taylor’s with my Sunday roast. I reckon a trip on the train is on the cards.

As we had ‘foodied’ out through the day we settled for a light ‘sobrasada on toast’ for tea. It rounded off a super day. I urge all to give it a go. I would book your lunch though. I doubt you’ll be able to walk in on a market Sunday.