“There can’t be a better spot on the canal in Wigan!”

The Flame is oft referred to (by me) as “a lady wot lunches”. She normally troops to some garden centre or other but one day she opined the virtues of The Boathouse at Appley Bridge. She even said “this is one for The Cooktwit”. Bank holiday Monday was, in our parts, a fine, sunny affair. After a tortuous morning re-felting the shed I was gleefully reminded of this canal side haunt. We booked it and went. We set off North to M6 Standish. By then a cool, thick fog had descended, our intended, after dinner sleeveless stroll was dashed.

Undeterred we settled in. The boathouse seems to have been some sort of hangar. I reckon being next to a canal it once used to house boats (give him a medal, what is he on? – Ed). The room is very high and features some nailed in beams. The decoration is new and is in the standard, new pub style of mixed, feature wall paper, tweeds, prints, mixed colours and block paint. It kind of works. It’s pleasant enough. Outside a huge pergola sits next to the canal. Its sides are filled at present to fend off a westerly wind; no doubt they will be relinquished on a hot sunny day. 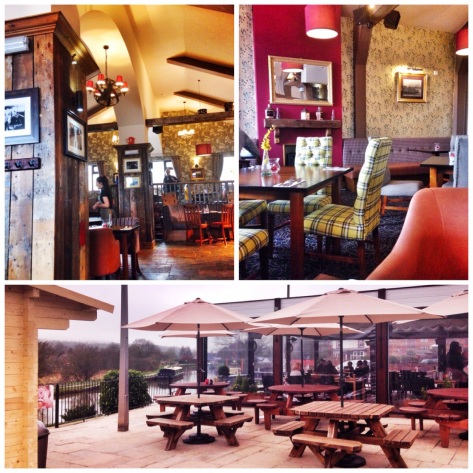 A pint of Prospect Brewery’s Silver Tally was soon in place to allow a perusal of the one sheet menu. It’s a very decent menu. The Flames assertion that The Cooktwit would be impressed was well founded.

I started off with a breaded pork schnitzel complete with apple and fennel slaw, pancetta crisp and a caper sauce (£5.95). The schnitzel was reassuring hot and moist, the slaw zingy and fresh. I was well pleased. The Flame didn’t have a starter but she was beaming. She knew she’d put me on to a good thing. 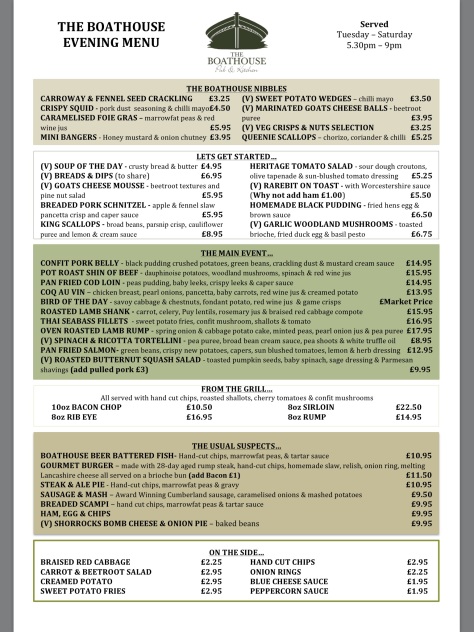 We both had a main course. The flame had the pan fried salmon with green beans, capers, tomatoes, lemon and herb dressing and a hot portion of chips (£12.95).  Everything was piping hot, straight from the kitchen which is on view. The salmon cooked to perfection, chips, light and crisp and a decent salad. No limp lettuce here.

I reckon I won though. I had a roasted lamb shank, which came with carrot, celery, puy lentils, rosemary jus & braised red cabbage compote (£15.95). Not too sure where the carrot was, but in their place was cabbage and spring greens which were engulfed in a rich lentil laden gravy. The gravy itself then swamped round a suitable mound of hot, buttery mash. It was a delight. The lamb fell away with minimal teasing. I wolfed the lot.

As you know I always have a sweet and today was no exception. Even the flame had one! A huge dish of apple and rhubarb crumble and custard (£4.95). The crumble still sweet and crunchy despite the overflowing jus. I had a classic lemon tart with honeycomb and raspberry (£4.95). I could have done with some ice cream for added lustre, but it was nice enough.

I’d have to say looking at the quality of the food coming out; it’s a definite try again. Burgers, fish and chips all looked top notch. The ‘we want plates’ brigade might have a thing to say as there were plenty of boards slates and nets! The Boathouse only opened in 2014 with two executive chefs and a mantra to use local, seasonal produce and champion local ales. It’s a fine offer. Get down early in summer though I reckon this is going to be a popular place. It even has an ice cream parlour outside. What’s not to like?

And if you have a coffee you get a mini eccles cake…….

One thought on “The Boathouse – Appley Bridge (near Wigan)”