“Take it from me, don’t use the M6 again! All you need is the A49 and The Cholmondeley Arms!”

The flame and I ventured south to the wonderfully named Shelsey Beauchamp. A young relatives christening the point of travel. A fabulous weekend was had in the Shropshire countryside. However, it was a tortuous trip south on the M6, so I vouched to head back using ‘A’ roads or to be precise the A49.

I wont lie though, there was an ulterior motive. I reckoned we would be needing a feed after a couple of hours and recalled from years ago that an old converted school called The Cholmondeley Arms lay in wait. The grapevine had suggested it had been made over and was on ‘foodie’ form. It homed into view exactly as I’d remembered it.

It made a fine sight. Spruced up brick, well tendered lawns, leafy foliage, a wealth of outdoor dining space. It was no less spectacular inside too. High ceilings, wooden floorboards, old school time accoutrements including roller blackboards! (remember them)? It’s a quality make over, the accessories budget alone must have run to a bit. Anyway, what about the food?

Well that was spectacular too. Explained in a flurry of old time font on a thick cream card resplendent with the coat of arms the menu makes a fine read. It lists a raft of British classics with a twist. Whilst I drooled over the litany of pink roast beef tumbling from the kitchen, we both went fish for mains, as we had dined from the cow the night before. The menu was surveyed whilst quaffing gently from a pint of Red Willows Faithless, a particular favourite.

I started with devilled kidneys (£5.95), each ‘offalic’ morsel licked with spice, and then based on a thick slice of sourdough slicked in creamy goo. An obligatory sprig completed the look. Wonderful start. The Flame went for the confit duck pate (£6.45). A lovely chunk set on an eventful salad and crunchy toast. She proclaimed it a total success. 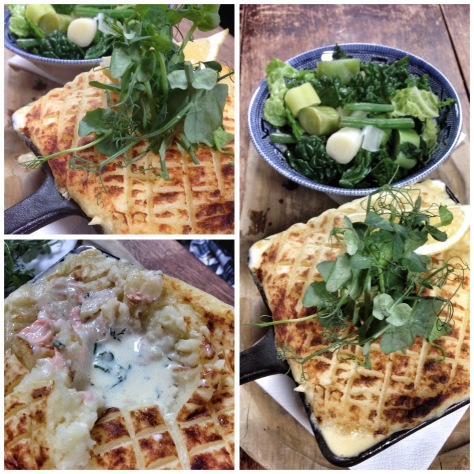 For mains The Flame went for her favourite fish pie (£13.45). It was beautifully presented in its own hot skillet with criss cross topped potato and supreme bowl of buttered greens. Plenty of fish in there but the sauce a little thin. Nonetheless a winner.

I went for the cod loin with pine nut and herb crumb with sautéed samphire, new potatoes, mussels and a lemon and dill sauce (£15.95). The cod a little bland in fairness, but cooked well, the crumb adding some interest. Any shortcomings were more than made up with by the accompaniments. When liberated with a ham fist, dill can rather overpower things; here it was gently laced lending the dish a soothing edge rather than a ‘wham’ to the palate. Great stuff. Meaty mussels, salty samphire, best new potatoes completed a truly satisfying course.

As ever a sweet finish was required. The homemade pud menu had me all over the place, could have stuck a pin in, but went for the strawberry gin and summer fruit trifle (£5.50). It arrived on its plank in a storage jar. The delivery just as God intended. A gin soaked base topped with vanilla custard and a slug of proper cream. Probably the best trifle I’ve had in a long while. Dessert of the year so far! The Flame had a very decent branded coffee complete with her own morsel of sticky flapjack.

So there we have it. Fabulous meal and a great plug for the A49! Came in at £48, so its on top gastropub lines. ‘The Cholm’ is seemingly a bit of a gin champion as well as a magnet for classic car clubs. Plenty of events up and coming. Nearby is Cholmondeley castle too. I reckon this is worth an hour or twos drive for anyone. Well worth the trip…