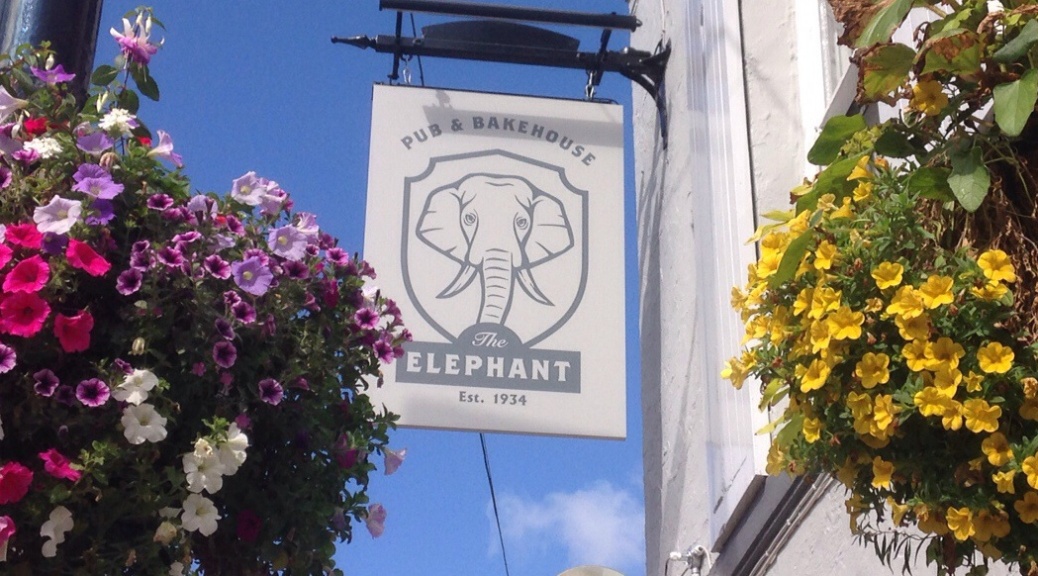 “Another quality food and drink emporium from the Simon Rimmer stable”

It was a rather subdued young relative that The Flame and I picked up from her newly acquired abode on the outskirts of Liverpool. Another session of student life beckons. However, the poor girl was minus her usual ‘bonhomie’ on account of her having her wheels half inched within hours of arrival by the local hub cap collection service. We figured an honest feed would win over the day. A quick plug into the ‘smartish’ phone revealed that Simon Rimmer’s new gaff ‘The Elephant’ was a mere five miles away. We pointed the steed towards leafy Woolton.

Always had a good meal at a Simon Rimmer place. He likes his fresh local produce, and that is what’s promised at The Elephant. Earle in Hale is good and his veggie haunt ‘Greens’ in Didsbury (reviewed here) is always good for a decent feed, so I reckoned we were in for a treat.

We slowly entered the sunlit village. The Elephant homed into view. And what a splendid sight. Dappled in bright sunshine punctuated with copious amounts of brightly coloured foliage. It really did look the part.  A smart outdoor area was being heavily utilised, we doubted we would get in.

However, the three of us were quickly ‘ooshed’ to a bright wooden booth complete with scatter cushions. Water based restoratives were quickly provided by the bright, smartly uniformed young chaps and lassies. All was well. As it was a Sunday the menu was a simple affair reflecting the British tradition of a hearty Sunday roast.

First impressions of the newly opened unit were entirely favourable. Farrow and Ball and the branding lads have done well here. The duck egg blue paintwork looked smart and contemporary. Any doubts that you were in The Elephant are quickly dashed as there are elephants everywhere, be it pictures or sculptures. There is a bit of a logo fest going on. Even the cutlery tins are branded! Still, it all looks rather agreeable. You could bring your mum here no trouble.

And what about the grub? Well as I said its simple Sunday fayre, but by hokey its good. The Flame kicked off with the healthy option. roasted salmon on a feta salad (£9.95). She concluded all was well, particularly liking the feta which gave the whole ensemble an acidic lift.

The aforementioned, hurting young relative was suitably perked to crash through a sensational Fish, Chip and minted mushy pea fest (£10.95). I’m a great lover of the traditional chippy tea and this was as good as any I’ve seen. I think you’ll agree from the image. Our ordinarily difficult to please student was well chuffed. I managed a quick forkful and concur that quality is the ‘mot juste’.

I continued my unofficial quest for the best Sunday Roast beef. At £9.95 this was well up there with the best. The beef was rare, tender and very tasty, just as I like it. All the veg wonderfully cooked and all piping hot.  The only issue for me was that I wasnt able to indulge in the vast array of craft beers that were on offer. Such was the choice that a beautifully presented (and branded) booklet was on hand to help. A previous nights excessive binge on the ‘hop’ had led The Flame to suggest I should refrain on this quaint afternoon occasion.

For research purposes the baked cheesecake with raspberry sauce (£4.95) was tested. And it was proper. No moussey mess here, proper baked job, lovely.  The vexed student commiserated with a chocolatey brownie and caramel ice cream (£4.95), again voted in with a considerable majority. No re-election needed here.

All in all a cracking afternoon. The bill came to £46.95 for the three of us and not a bad course. The service was superb, swarmed as we were with young, pleasant enthusiastic waiters. We reckon we’ve found another favourite and if you fancy something really different tagged round the back is ‘The Liberty Tavern‘ an American diner full of lobster and pancakes. We’ll be trying that one as well soon.