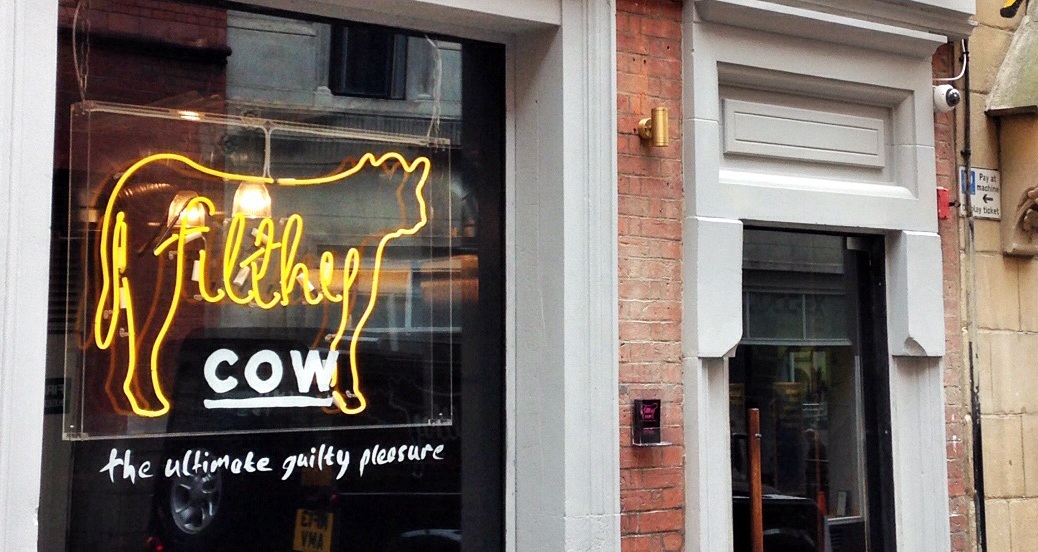 “Danger, there may be images of lightly cooked mince in this review!”

Not sure what else I can add here. It’s another burger joint in Manchester. It’s good though. It’s called Filthy Cow and it’s on Tib Lane in the old Lounge Ten gaff.

I do recall the last time I was here. An olive skinned lothario crooned sweet nothings down my lug ‘ole whilst trying to woo The Flame over an incredibly expensive medium rare steak. Lounge Ten, ten years ago was the place to be for a while.

It was a bit of a shock when I romped into the old place now though. It’s been stripped of its soft furnishings and transformed into some sort of dungeon. A girder construction hovers down the left whilst a suspended, industrial scale hoover hose joins outside to the backstage griddling deck. Graffiti covers the walls whilst small, screw top stools dot round a collection of dated tables. It’s a transient space this, not designed for comfort. Still it does the job. I suppose that’s the plan, get them in, get them out. It’s not for loitering.

It must work though. It took a few visits to actually get served at lunchtime; such was the numbers wanting to try it out. It finally succumbed on a glorious sunny Friday. Even then it filled up quick. It does have an upstairs but it was shut when I went.

I ventured in with work chum Kev. He likes a burger. We sidled up to the bar. A rather pleasant young lady laid down the procedure. We ordered up from the limited card. We avoided the ‘special’ pork and chorizo burger and went for two ‘standard’ Filthy Beasts, a portion of chips, a guava pop! and a Ginger Comforts vanilla milkshake. £24 the lot. Burgers £7.50. We sat down by the window (the only light) and sat patiently with our very own flashing, warning disc.

Bit of a masterstroke getting local ice heroes Ginger to stump up the ice cream for the shakes. Bit steep at £4.50 but boy it was good. Glorious, creamy filler for the main event. After a few minutes our flashing alert disc sprang into action. The filthy beasts duly arrived. They were sheathed in their own ‘izal’ bog paper wrap, each topped with their own ‘filthy’ badge. Once unravelled we both marvelled at the spectacle. Moist, pink patty, crisp lettuce, crispy bacon and lashings of cheese. No question it was a great burger. I would say as good as I’ve had at other famous establishments in the city. We wolfed the hot salty chips and wiped ourselves down with the branded napkins. We left some twenty minutes later very happy indeed.

I’d have to say I was pretty impressed, clearly young Jordan Gallimore, proprietor and inventor of the breed has done the homework. It all works well right down to the clever branding. Even the jeep outside had it. You could argue the offer is a bit limited and that continued success relies on our continued insatiable appetite for the humble gourmet burger. But being honest I don’t see a break in that for some time yet. Roll on.