It’s a blustery, cold, November, Sunday morn. The Cook Twit has succumbed to a virulent bout of ‘manflu’. Such is its ferocity that full blown ebola has taken hold. I doubt this blog will get finished. The flame, unable to accompany me on this trip, calls me a wimp and tells me to get on with it. I venture aimlessly into Manchester. A protracted visit to ‘The Hungry Gecko’ in Chorlton is curtailed as the local trolley buses are off due to ‘engineering works’.

The Cook Twit is nothing if not a resourceful soul. When faced with such adversity, he brushes himself down, he doesn’t quibble, he quickly gets himself into a hostelry for an alcoholic restorative to ponder his next move. A pint of ‘The Governor’ quickly puts the old fish oil into gear. Never one to shirk new technology, google maps reckons I am a mere 170 yards away from ‘Luck, Lust, Liquor and Burn’. Handsome words have been scribed regarding the qualities of this Northern Quarter stalwart. Not least for its kind rescue act of the burger joint ‘Almost Famous’ whose burgers Liquor and Burn now feature.
Liquor and Burn (for short!) is housed in a quaint, corner plot close to the former market gates in the High Street in Manchester’s trendy Northern Quarter. 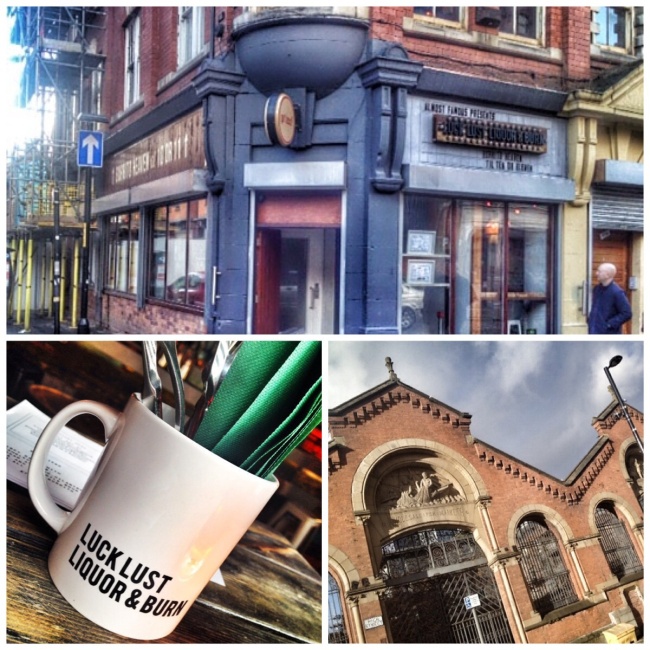 In order to keep in trend it is not posh. Decor is strictly hip, up cycled, mis matched wooden furniture. The soundtrack is Marvin Gayeish and at a pleasant volume. The vibe therefore is very relaxed and the flashing young blades behind the bar made the cook twit very welcome. No real ale of course but a dark, Brooklyn lager kept the pipes moistened. The menu is printed in black on white A4. Courses have flash titles with hip tag lines, letting you know what you’re in for. Chicken Lickin, Beef Smackdown and Triple Nom just some of the names. 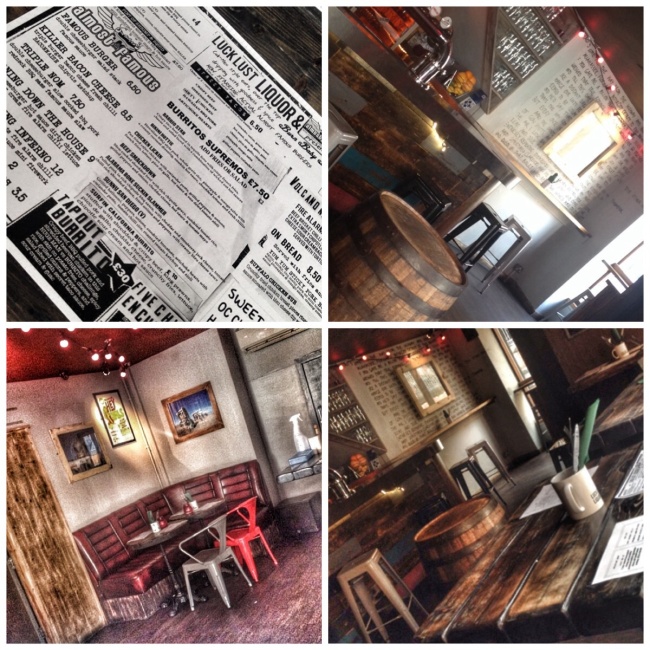 Tucked away high on the left was my corking starter. A pint of shrimp and squid for £7.50. These exquisite pieces of succulent seafood came hot and deep fried in a light salted and BBQ batter. They came with two dips, one a hot sauce, and one a sundried tomato sauce with pieces of fresh lime to squeeze over. I have to say this was one of the best starters I’ve had in a long while. The effects of the death ridden strain of Ebola was subsiding fast.
For the main I had ‘Fire Alarm Chilli’ for £8.50. Again well presented in its own cast iron skillet set in a terracotta dish with tacos on the side. It came smothered in various sauces and creams (cheese and sour cream) which I may have preferred on the side. The chilli itself was delicious though. Very tasty with a nice heat. It had pulled beef, bacon and chorizo in there which all conspired to give a wonderful smoky flavour. I resisted the salted caramel brownie for afters. 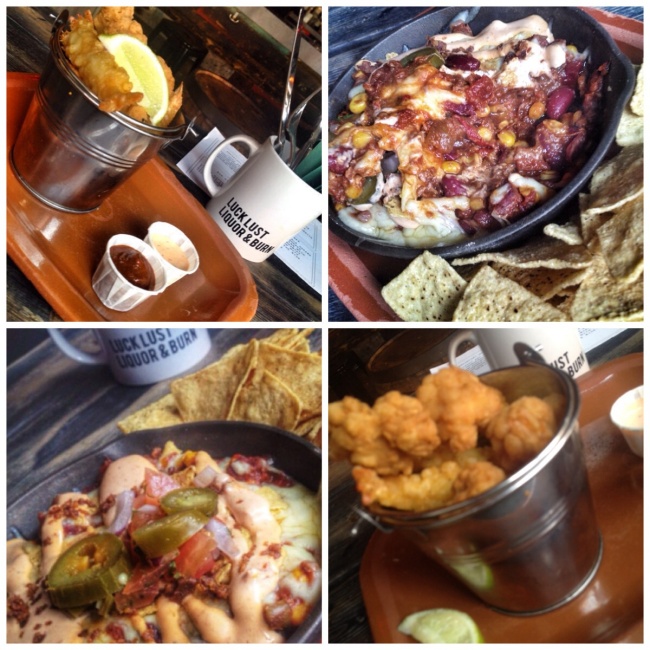 All in all a very pleasant hour and a half for the cook twit. Perched on my high stool by the window I had a great view of the bar in action. Obviously being a Sunday afternoon it was probably a little quieter than say a Friday night. I’m sure the action revs up a bit then, along with the volume of the music, but it had a great atmosphere and the service was fine.
Manflu? What manflu!
Luck Lust Liquor and Burn
100-102 High Street, Northern Quarter
Manchester
0161 832 8644
http://www.lucklustliquorburn.com