I work in Manchester and walk down Deansgate most days. For months now I’ve passed this strange little, yellow, corner plot called ‘Byron’. It has a sub title ‘Proper Hamburgers’. I’ve always wondered whether it was the naffest bit of branding you could imagine or the cleverest. It has a very plain typeface and shop frontage. However, the thing I have noticed, it seems to get plenty in. Lots of business types, young and old.
Manchester has had a burgeoning burger empire for some time now, sprouting mainly from its trendy Northern Quarter. Indeed I’ve already reviewed a few, ‘Almost Famous’, ‘SoLita’ and ‘Luck, Lust, Liquor and Burn’ to name but a few. They’ve all come up trumps in my book, so how would ‘Byron’ fare? 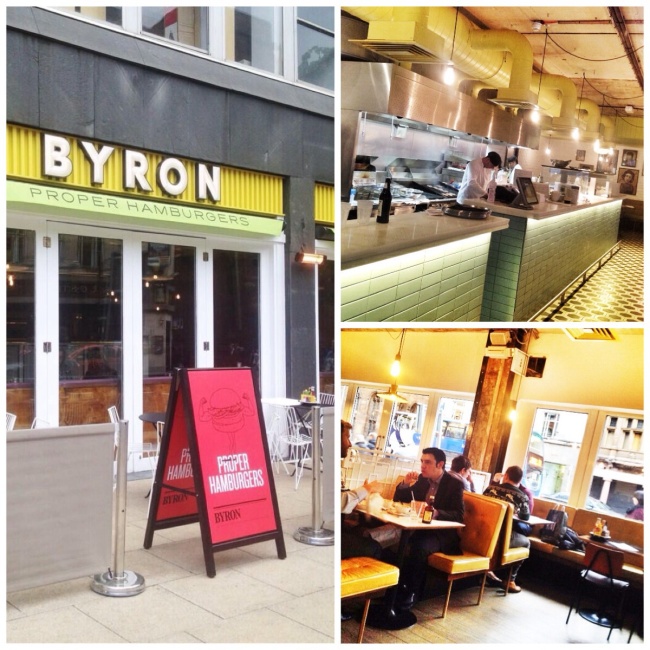 The Byron story hails from the misspent youth of its founder Tom Byng. He ate proper burgers in America at a diner called ‘Silver Top’ in Providence, Rhode Island. He reckoned they were simple, tasty, a bit messy, but made with good quality meat with classic adornments; some lettuce, tomato, red onion, and maybe a slice of cheese or bacon. He opened up his first gaff In London in 2007, with the mantra to do a simple thing well, and do it properly. A laudable aim. The beef is good from Scotland, minced fresh every day, cooked medium so it’s pink, juicy and succulent.
I ventured in as part of a fifteen man posse (although there was some girls as well!). We had to split up to fit in, but we were quickly seated and it wasn’t long before an ice cold can of Brewdog Dead Pony pale ale was in hand.
The decor is simple. Yellow is the dominant hue. Exposed concrete, exposed containment (painted yellow), old school chairs, pastel tables and mustard banquettes complete the look. I suppose it is meant to shout industrial, up cycling, trendy, in one easy swoop. It’s pleasant enough.
We all chose from the simple menu, burgers with various extras. I plumbed in for the ‘Byron’ burger. Plain burger with crispy bacon, lettuce, onion and melted cheese. One of the team had a veggie burger.

We ordered a shed load of extra fries, chips and onion rings. I have to say my burger was superb. This was a view shared by the whole team, including the veggie! My burger was indeed served pink and was succulent and juicy as per the ‘Byron’ mission statement. It wasn’t cheap (£9.60 for the burger) but then this trend for quality burgers does come at a price. The bun was soft and soaked up all the luciousness that oozed from the centrepiece.
We were served by a smiling and enthusiastic young waitress. Nothing was too much trouble. All in all, couldn’t fault it. A simple menu, quality craft ales, great ingredients, good atmosphere. There are thirty four ‘Byron’s’ kicking about, only five outside London so you will have to hunt round a bit, but if you find one give it a  go.
http://www.byronhamburgers.com/locations/