The Flame required pampering. A boys outing was in the offing and so something Italian and informal was needed. Salvis, the long standing Manchester based Italian produce importer seemed to fit the bill. I’ve already reviewed Salvis Cucina, so I set my aim on the newly re-opened Salvis Mozzarella Bar in the Corn Exchange.

We arrived via a cocktail or two. Unlike the flash new names that are exploding upwards into the rather impressive Corn Exchange, Salvis have burrowed into the bowels for their dining area. You enter via a wonderful, understated frontage with a few outside tables and then through a narrow but non the less exquisite deli area. The restaurant is down some steps at the end of the counter.

Our table for two (could have sat four or five) was secreted as far into the bowels as possible. It’s fairly dark down there, but rather romantic. Tables are wooden of a rustic nature, the chairs wooden also with a sprig of coloured paint. I’m sure I passed a tree under there too! Despite our booked appointment of 6.45, the place was full, the staff a little hassled. However, our waiter soon had our table cleaned and prepared and a bottle of Bardalino set up. We surveyed the large, two sided, menus. A blaze of Italian classics, we were drooling. 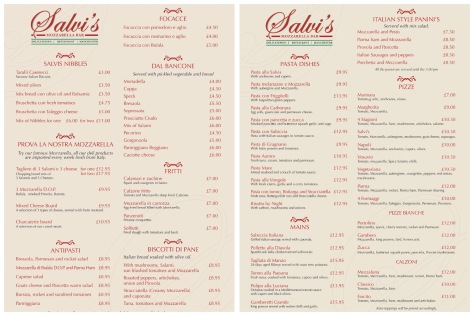 I started with Mozzarella in carrozza (£7.00) Egg fried bread filled with Mozzarella. Well, it is a mozzarella bar after all! I mean melted cheese, deep fried, between two slices of eggy bread, whats not to like? I wolfed it in no time.

The Flame went Goats cheese and Pancetta warm salad (£8.95). Not keen on goats cheese myself, the flame loves it. I did taste the pancetta though, wonderfully smoked, it was delish! Both dishes very simply presented, no dots of jus or smears here!

For mains I had the Farcito Calzone (£11.00) Tomato, Mozzarella, ham, mushroom and artichokes. Whilst it’s fair to say a calzone pizza doesn’t look much when first presented, this one soon made its mark. The customary ‘leoparding’ (charred raised bits of dough) was all present and correct. One swift cut through the middle soon had the uncious ooze of the Mediterranean swimming across the plate. Soft globules of herby artichoke, tomatoes and ham melded in a moist puddle of olive oil. It was wonderful.

The Flame went a little more out on a limb. Tonno alla Paesana (£12.95) Fresh tuna, cooked with tomatoes, capers and olives. Tuna seemed a touch overdone to me, but tasted superb. Maybe the substantial drizzle of hot Italian accompaniment sent it over from pink. This is right up The Flames street, she declared it devine.

As ever, whenever Im in an Italian I have to have tiramisu, just to test against my childhood memory from Don Luigi’s in Culcheth! This didn’t disappoint. Soft, sweet, creamy and boozed with coffee. A massive portion though, with two spoons. I think they misheard when I said we only wanted one?

As the accent is on romantic rather than bling in here the images are a little dark and don’t do the food justice. We thoroughly enjoyed the whole experience, The Flame quickly acclaiming it one of her favourites. The bill came in at £75, which contained a £20 bot of Bard, so I reckon that was pretty good.

Theres plenty more great dishes to try, so it looks like we’ll be back. Would have to nip back anyway, just to buy some mozzarella from the deli bar….