“If you’re ever in Newcastle you’ll do a lot worse than nip in here for tea!”

Whilst touring the North East as part of my day job I was left searching for somewhere to stay. A quick flirt into booking.com soon had me ensconced in a rather dreary, corporate box called Jurys Inn. However, it suffers from a rather sensational location overlooking the magnificent Tyne, a stones throw from their version of The Millennium Bridge. Despite being a Monday night, a quick ‘reccy’ soon had me peering into the windows of the local eateries. I knew ‘House of Tides’ was close by, but knew it would be shut. Twitter, soon had me tapping into the wonderful ‘Broad Chare’.

Its stationed yards from the aforementioned River Tyne in an old ‘warehousey’, shipping type building. Looks rather wonderful actually. I stepped in past the ‘Michelin’ approved stickers. Unlike most gastropubs of late Mr Farrow and Mr Ball have struggled to impact this particular gaff, as indeed have the deliberately mismatched fabric emporiums. This is strictly ‘vinylette’ flooring territory in standard colours. its wonderfully basic. A well stocked bar to the right beckons. A magnificent selection of cask ales soon has the eyes on stalks. A pale pint of local ‘Writers Block’ was ordered up.

I then instructed my genial host to pull back a chair and settle me in for a slap up feed on a table for one. “Certainly Sir, we should have one in an hour”. An hour! on a monday night!. I settled downstairs with some local magazines. Thankfully, some twenty minutes later, a wonderful table, upstairs by a window was dutifully prepared. I surveyed the stark, paper table mat/menu. Super, pub grubby type stuff with some interesting twists at decent prices. All was well. A specials board highlighted to some more seasonal offerings with a slightly weightier price tag. I stuck to the standard offer (as work was paying!)

Starters had me quaffing some glorious nuggets of monkfish cheeks, dredged in a spicy crumb with a homemade tartar sauce alongside. All piping hot and a bargain at £3.75.

For a main I went for the bubble and squeak with two glorious duck eggs and homemade HP sauce for just a tenner. Two big, fat, fried, squat rings of ‘taters’ and greens smothered by two fried eggs, all set on a slurry of piquant, brown sauce. It was glorious. Truly hit the spot.

To finish I went for almond rice pudding with sour cherries at £5.50. A hefty bowl of dreamy, creamy goodness with the added bonus of an almond crunch matched with the sweetness of cherry. Another storming dish. 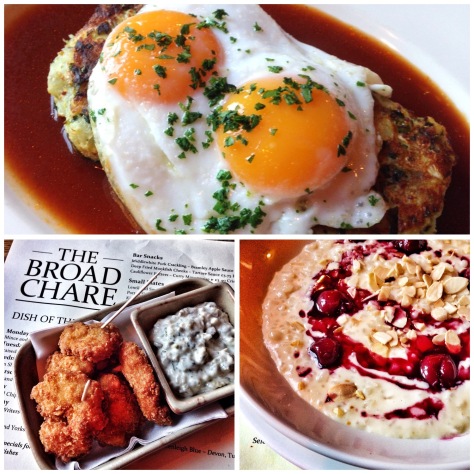 Rarely have I enjoyed three courses together as much as this and all washed down by a decent pint in a thoroughly convivial atmosphere. Service matched the pleasure of the eating. All in for £25. Cant say fairer than that. 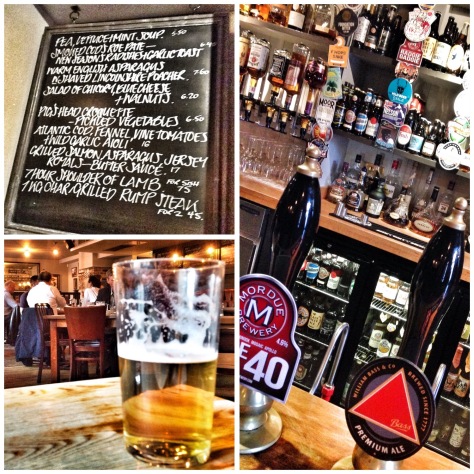 I was informed next day by a local that its all the brainchild of local restauranteur/chef Terry Leybourne who has a few other outfits in the town. Sounds as though Newcastle is rather fortunate. Along with Kenny Atkinson round the corner at House of Tides It seems it has its all its eating places well sorted. Ill have to get up here more often…