“By pure coincidence I am reading Commandment 5 in his book The Ten Commandments of Food by Jay Rayner. It states “Thou Shalt Not Cut Off The Fat”. I had a glorious piece of beef with globs of golden fat at The White Swan at Fence. Its where all the flavour is!”

The White Swan has been on the list for sometime, indeed Jay Rayner himself has dined and proclaimed allegiance to this quaint little public house in the rural shadows of Pendle Hill. Its yet another glorious stab on the map for Lancashire.

We began the hours run in glorious sunshine, but on arrival the clouds had descended. The poor light didn’t particularly help the aspect. The building appeared more brown cygnet than graceful white Swan. It is small, out of the way, and next door’s scaffolding grafted at one end added to the slightly disappointing initial impression. Venturing round the back there is some smart outdoor seating, which I’m sure would be most welcoming in better weather. That said once inside things soon picked up. Despite not many people being inside there was an immediate warmth as we were welcomed in with a beaming smile. 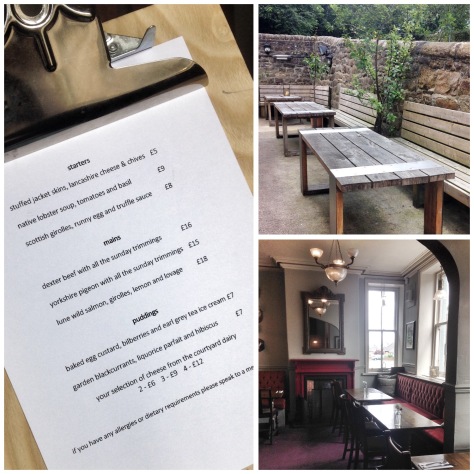 A glorious, polished welcoming bar hits first. A larger, naturally lit room opens up to the right, a smaller, darker room is left through an arch. Having the pick of the tables we decided this would be the room to go for. It was tastefully festooned with local countryside accoutrements. A couple of full antlered deer had hit the walls hard from outside and candlelit pentagons ladened the cills. We settled with a pint of Timothy Taylor’s and ruminated over the bijou and well set menu. It’s a simple A5 card clipped to a board. Three starts, three mains, three afters. Simplicity itself.

As ever for me a blindfold and a pin would have sufficed. The Flame however, was struggling a bit with the limited choice. We got there though.

For starters The Flame had the stuffed jacket skins with Lancashire cheese and chives (£5). I went for the Scottish girolles, runny egg and truffle sauce (£8). It came in a curvaceous bowl, the yolk was wonderfully sous vide and soon melded into the buttered girolles. I ate it with a spoon. It was absolutely sublime.

For mains The Flame went for the Lune wild salmon, girolles, lemon and lovage (£18). Beautifully cooked and presented she was a little disappointed with the portion size and lack of sides. We had an extra portion of the sunday trimmings to bolster the offer.

I went for the dexter beef and all the sunday trimmings (£18). Ive never had dexter beef before but it wont be the last time. Not sure Ive ever had beef as tasty as this. Cooked pink with a swathe of golden fat along one edge it was totally ‘historic’. The trimmings were just as good too. As the Masterchef greengrocer would say “smooth, hot buttery mash and beautifully seasoned”. Buttery barrelled carrots and cabbage, great yorkshires and cauliflower cheese though the ‘roastie’ was a bit over to be honest.   All in all a great sunday roast.

As ever a dessert for me. Baked egg custard, bilberries and earl grey tea ice cream (£7). Never has the term ‘less is more’ been more apt to describe the genius of this delightful morsel of sweet heaven. As Mr Rayner himself quotes “no one needs dessert”, as we are always full from our savoury courses, but thankfully I persevered! It was simply stunning, I could have eaten bowls of it.

The Flame had two cheeses from the cheeseboard (£6), I say cheeseboard, more like a cheese table! I reckon the HSE should get involved it must have weighed a ton. Ive never seen so much cheese. But fair play, the jovial waitress described every one. We settled on a red Leicester and a sensational Killeen goats cheese Gouda. Thats going on the list as a buy!

The bill came in at £75 with a tip. Hardly your two for a tenner gaff this! This is a real food lovers experience, Its probably fair to say if you are a bit fussy this might not be for you. As for me I’d happily eat here everyday for ever……..