“These RVI (Ribble Valley Inns) pubs are still doing it well, though others are cathcing up”

Been to a few of these, there are four in total. The Three Fishes in Mitton was our first. They all boast high standards of produce from local artisans. Images of Jeff and his bangers, Mavis and her sourdough and others adorn the walls  to emphasise the deal. The Clog and Billycock in sleepy Pleasington, a rural village on the outskirts of Blackburn, maintains the tradition.

Another feature of them all is the smart decor and impressive fit out materials. No nailed on OSB and cheap ply in the Ribble Valley Inn group. Veneered, light oaks and high end fabrics create a sumptuous feel.

The menus and food are great too. Its extensive Lancashire based fayre. Nigel Howarth’s hot pot, fish and chips, black puddings, scotch eggs, they’re all here. As it happens we chose from the rather inviting separately printed, spring menu. 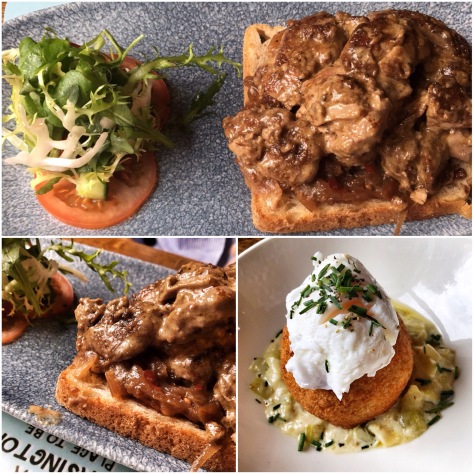 The Flame had wonderfully spiced chicken livers on sourdough, my slightly disappointing start was a rather dry fish cake, with an equally dry egg, which was, however, just saved by the swamp of creamy leeks that it sat on.

Mains were a triumph. Super fish pie whilst I had the best moules frites since an alfresco lunch in Lille in 1990! 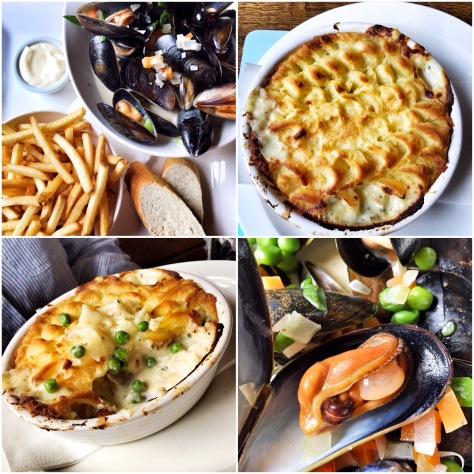 I finished with the delightful white chocolate and lemon curd posset which came festooned with spring fruits.

Since we went a few weeks back the press later announced that the Northcote/Nigel Haworth alliance was selling the four RVI emporiums. I hope they go to a good home and maintain the standard. They are a rare treat.