“I haven’t been to many Michelin star restaurants in my life, but I think I need to start going to some more if this is what happens!”

It was a celebration, The Flame and I had notched up twenty-seven years of wedlock. A weekend in Cambridge seemed like a plan. I bagged a late spot at Alimentum, one of Cambridge’s Michelin starred restaurants. Its headed up by Mark Poynton, a celebrated chef who recently did a special stint in Manchester’s Iberica. I missed that one. 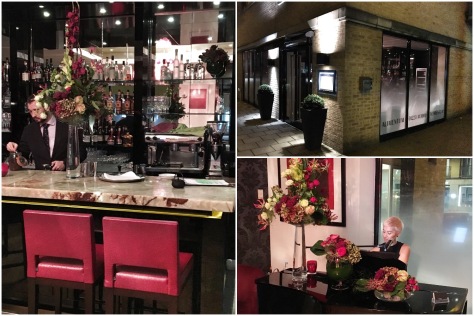 We normally like to eat early, say seven, seven thirty but we could only get an eight thirty slot. A couple of ‘liveners’ in some of this beautiful city’s famous pubs and we set off with a gentle stroll to Hills Road. A touch to The Flame’s annoyance I hadn’t thought it fully through. It was a good half hour from the centre. Perhaps a taxi would have been a better idea!

Unlike much of the ancient city, Alimentum is set at the base of a modern tower block close to the railway station. We ventured in, fairly ravenous from an early lunch. We were warmly met, coats dispensed and placed at our table. Our table was set in front of a large envelope shaped window with a glorious view of the brigade preparing the nights food. I was totally thrilled.

The room is elegance personified, red is the featured hue giving a wonderful warmth to the modern room. Ivories were being tinkled. Just needed a pair of slippers to complete the relaxation process!

We settled on an aperitif of sherry to start before perusing the stark, black on white menu. A thing of graphical beauty. We decided to forego the seven course taster (£80 each) on account of the time and stick to the three course a la carte (£70 each). The choices are simply described using single words to highlight the main elements. No lyrical waxing here! 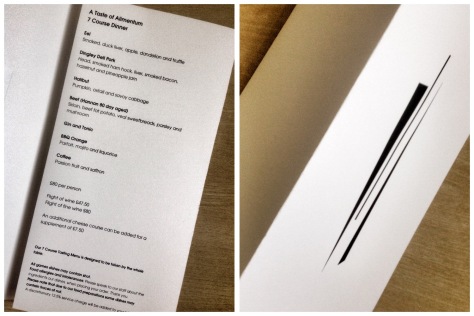 Amouse bouche first, lancashire cheese bon bons (I think) and some incredible black cuttlefish things set in a box of architectural gravel. Seconds of aural pleasure. For the first course The Flame went for Mackerel (scorched, bolognese, celeriac and cuttlefish tagliatelle). It was a mere morsel really, set in a huge copper coloured bowl, it was thoroughly loved though.

I went for Eel (smoked, duck liver, apple, dandelion, truffle). The eel came set in cubes dotted about the plate around the liver of duck. The accompanying globules and shreds of flavour completing the stunning effect.  A veloute of mushroom washed it down.

Our second course was halibut and venison. The flames Halibut (pumpkin, oxtail, savoy cabbage) was crushed in pumpkin seeds and pistachio. A croquette of ox tail complete with smears of green completed the picture. My saddle of Venison (prune, chestnut, blue cheese, girolles) was set on a glossy glaze of chestnut and prune. A cigar of ‘wonderfulness’ encased the blue cheese. Utterly tremendous dish. I was genuinely upset when the last morsel went in. A mouth cleansing dollop of ‘gin and tonic’ prepared us for the dessert.

I simply went Lemon (curd, white chocolate, fennel) whilst The Flame went for cheese. The lemon and chocolate was dolloped with precision, the fennel slice, perhaps arranged to represent the many university buildings in the town? Added a savoury touch. The cheese board was a classic and was beautifully described and presented. The Flame chose well. Smoked, blue, soft, hard and creamy, all English and superb.

Coffee, brandy and petit fours were delivered to round off. The bill with tip added came in at just over £200. A snip for this quality. It is sadly quite rare that we eat like this, so I can’t compare to many. The French (reviewed here) probably shades it and Ormer (reviewed here) are pretty much the only other dining experiences of this ilk. Alimentum delivered a superb evening, fully befitting the occasion. Go if you can…. 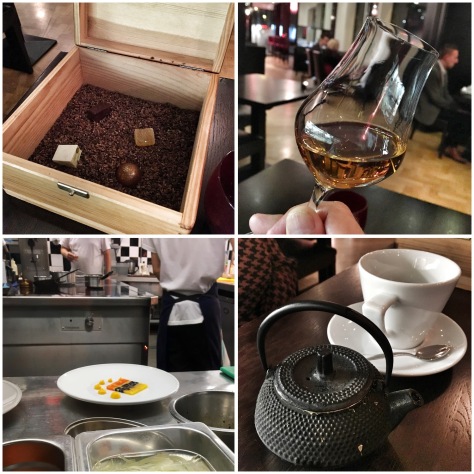