“Jumble by name, Jumble by Interior and menu! But it all turned out rather splendid in the end….”

I’ve fancied this for years. It was featured in the Sunday Times as a top bistro type affair. I finally made it over the weekend when out schlepping round Grasmere and The Lakes with some chums from Yorkshire. The Jumble Room is set down a leafy track from the centre of arguably the prettiest village in Cumbria. It’s a tiny space that juts out from nowhere in a riot of haberdashery which festoons two large windows. Its family run by Chrissy and Andy who’ve run the place as an independent, gastronomic emporium for over 23 years. I’m sure you’ll agree a fine and enviable achievement.

We surveyed the elegant, single page menu whilst marvelling at the eccentric interior. Platoons of intricately embroidered cushions litter the basic wooden benches, while the vibrant red walls house a flurry of hand painted caricatures of the local cattle and sheep. Comics, Indian sayings and ‘Herdy’ salt and pepper cellars complete the look. I loved it. 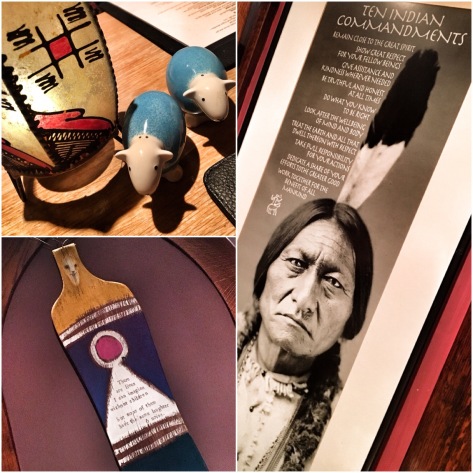 The menu is short, a few starters, a few mains, a few desserts. Cuisine is from all over the place, though mainly eastern. How about Persian lamb? The Thriller from Manilla? Pinatubo Chicken? This is not a chips, steak and onion rings type of place!

We started with a slate of kicking crab crostini, Whitby crab laced with basil, coriander and a fleck of chilli (£8.50) a bucket of plump olives with homemade bread (£3.95) and a glorious Spanish salad, marinated figs, manchego cheese with hazelnuts slicked in a red wine and balsamic dress (£7.95). The Flame loved her salad (as always!) Whilst I woilfed the spicy crabby crisps.

For mains I went against my normal mantra of not having a restaurant curry by having the Malaysian seafood curry (£20.00), featuring prawns like babies fists, hunks of hake and glorious lumps of salmon. A veritable feast of flavour. The spice building beautifully with each tender morsel.

The Flame swapped the lamb for chicken in the Persian dish (£23.00). It came served on hummus, roasted aubergine, butternut squash drizzled with pomegranate molasses. A riot of flavour and textures…..glorious.

The Pinatubo Chicken (£18.00) was tested out by Julie. Set with a spicy lemongrass and coconut sauce and a fragrant annatto egg fried rice and greens. I managed to sneak a bit of the rice which was laced with peanuts too. Another tremendous dish.

The fourth member of the team had some difficulty finding something from the menu, so we requested a simple steak and chips which the team duly brought together, albeit swamped in a teriyaki sauce and a flurry of stir fried veg.

We even had desserts. Me a towering pavlova, whilst many adopted the sumptuous, family recipe of rushbearing gingerbread cake and ice cream, each at £7.50. Gingered and moistened upto 11, historic. We then munched on probably the most beautifully presented, complimentary, cheese boards ever. 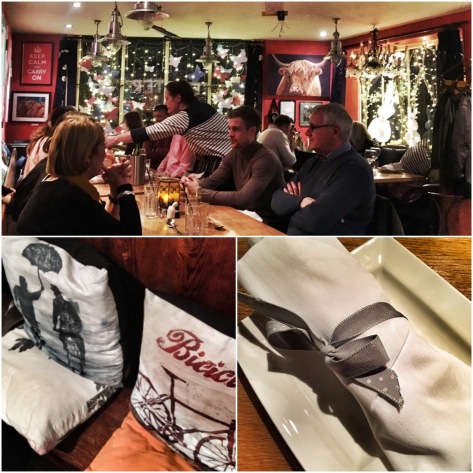 With a couple of house bottles the whole lot cruised in at £190 for the four of us. For me it met all expectations. A wonderfully eccentric decor allied to a wonderfully eclectic menu made a thrilling experience for me. Such is the small layout it does suffer from having two doors that head straight outside to the street meaning on a cold day/eve one could suffer on certain tables from a touch of leg draught, but its all part of the fun. Its probably not for anyone with simple tastes, but as we found, don’t be afraid to ask. This wonderful team are more than happy to switch things around to accommodate.

The whole place is quirky and fun, it even has a Slade album cover in the loos……It’s a must do from me……