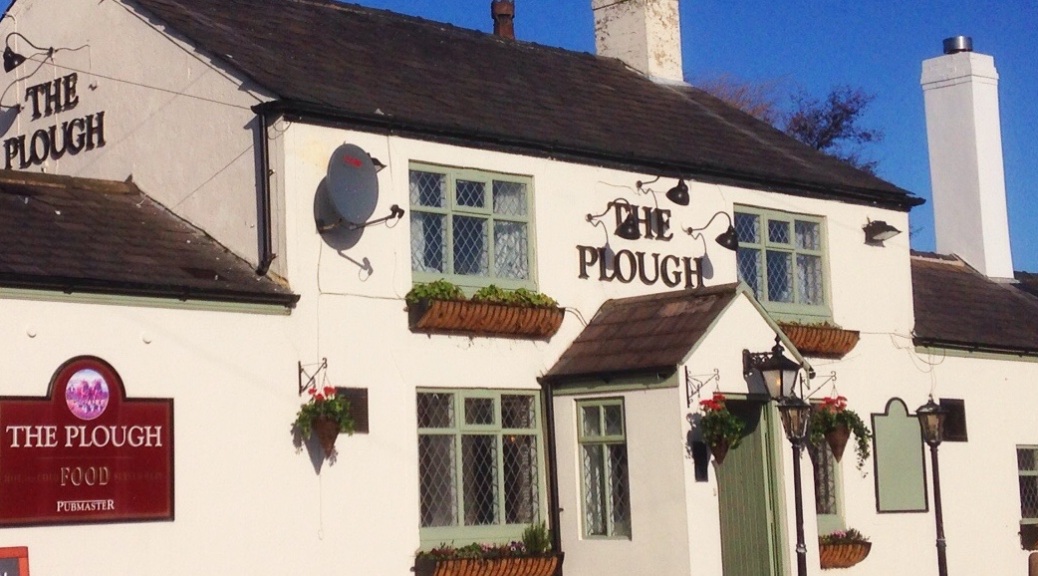 “Sorry everyone but I’ve found another great place to eat”

The Plough Inn at Croft, like many pubs of late has had its ups and downs. Many years ago I recall it being a fairly standard local pub. Frequented often by its local rural crowd, it did what many pubs of the time did; serve half decent ale and a decent pie and chips when called upon. As we know many pubs, particularly rural ones, have either gone to the wall or effectively become restaurants or ‘gastropubs’. I have already ventured to and regaled about many fine specimens throughout the North West. See list below!* This latest one has the distinct advantage of being walkable from my home town of Newton-le-Willows. It’s a good walk mind, about four and half miles, so it’s a summer stroll or a winters Sunday. But boy on this evidence it’s worth it and its going on the list.

The Plough has succumbed on and off to periods of neglect, however it seems a hefty dose of love and affection has been awarded to its period frame. A splash of paint on the outside has freshened its gills, a lick inside has set its heart alight. It still needs a bit doing inside I fancy to fully compete with the esteemed list below, but without doubt the raw materials are all present and correct. Timber beams, an open fire, dark wooden fittings. It will do nicely.

The sun was streaming through on this Sunday binge, the place almost empty. The Flame flitted between several tables before selecting a suitable spot. A Deuchars IPA, one of three real ales, soon had me purring. The comprehensive menu soon added to my contentment. In fact there were two menus. The standard Sunday offering and the Sunday lunch. I selected from the Sunday lunch at £17.95 for three courses.

The Flame started with what one would consider to be a fairly unadventurous choice. The soup of the day (£4.95). However, even it was presented with a good level of panache. Tomato and basil arrived on its own podium of timber and featured a decent swoosh of cream, herbs and breaded elements. It tasted good as well. I had the ‘Ham hock terrine’. This was as good as a starter as I’ve had in a long time. The terrine was housed in a tubular ‘kilner’ jar. The hock itself was coarse, meaty and splendidly choice in flavour. The accompaniments of homemade piccalilli, toasted bread, salad and various drops of dressing and shoots all added to the general appeal. Excellent stuff.

As it was a Sunday, my mains took on the familiar look of a traditional roast. Would have preferred a pink, topside but the slow cooked brisket went a good way towards making up the deficit. There was lots of it too. Combined with the standard, well-cooked accoutrements it was most agreeable. The Flame piped in with a chicken and leek pie (£9.95). Arriving in its own skillet on a board it looked a picture, particularly alongside its pot of crisp, hot, salted and skin on potato wedges. They alone were a triumph. The pie was chunked full of chicken, writhing in a rich sea of herby, leeky goodness. Good stuff.

As ever, for research purposes, I had to test out a dessert. And crikey, in trooped a memorable effort. Apple and granola crumble with custard. Arriving in its own earthenware pot, set on a slate it came with a riot of coulis, kumquats and a boat of hot, vanillary loveliness. Truly special.

By the time I was dousing the dessert down with the final slurp of IPA the place had filled up. It would seem you would have to book for a mid-afternoon slot on a Sunday. I wouldn’t hang about, when word gets around this could become a serious stopping point. Cheshire has another belter to go at.

*Parker Arms, Nags Head, Assheton Arms, Hearth of the Ram, The Old Sessions, The Church Green, The Three Fishes to name but a few!